Janine Antoni is a contemporary artist who was born in Freeport, Bahamas in 1964.  Antoni studied at Sarah Lawerence College in New York, and earned her Masters of Fine Arts from the Rhode Island School of Design.  Antoni has had her work shown in a vast variety of museums including the Whitney Museum of American Art, the Solomon R. Guggenheim Museum, the Irish Museum of modern Art, and many more.
Antoni’s work consists of sculptures, performances, and installations and often uses her body to perform everyday activities to create her artwork.   For example, in 1992 Antoni created the piece “Loving Care.”  For this piece, Antoni used her hair as a paintbrush to resemble mopping; traditionally a woman’s chore and loving care hair dye to paint paper on the gallery floor.   Antoni explored femininity and power through this project as she does with many of her projects.    Another piece where Antoni used her body to create a sculpture was “Gnaw.”  “Gnaw” consisted of a three-part installation of 600 lbs of chocolate, 600 lbs of lard, and lipstick tubes and chocolate box packaging.  Antoni used her mouth to literally gnawed at the chocolate and lard blocks; melt down the lard and chocolate that she spit out to recast into heart-shaped packaging for chocolate candy and lipstick.  “Then I made this display, trying to imitate a department store to put all my products in. I was sort of interested in how you were overcome with desire for the chocolate, you were kind of disgusted by the lard, and then I would turn around and take that very material that was disgusting to you and make it into lipstick which we use to make ourselves attractive” according to Antoni.
One thing that inspires me about Janine Antoni is how she tries and tries again when it comes to her work, if she does not get the right reaction from her audience she tries to display it in another way.  Antoni stated in reference to her “Loving Care” piece, “The first time I did Loving Care, it was not a performance; I did it as a relic and I showed it that way. It didn’t work! I realized that it wasn’t like Gnaw where the history was on the surface of the object and a viewer could re-create how it was made by looking at it. While making Loving Care, I realized that the power was in watching me mop the floor. The audience is the wild card. I am collaborating with them and I’m never sure how they will respond.”  I recently took photos for my project and knew once I saw them that they weren’t quite what I wanted them to be.  Therefore I re-shot looking from a different perspective and am very pleased with the direction my project is moving in now.
Gallery: Most recent gallery exhibition was 2006, “Lore and Other Convergences,” at Live Art Development Agency initiative, in London.
Website: Janine Antoni does not have a website.
Interview: http://bombsite.com/issues/66/articles/2191
Art21.  Janine Antoni.  5 March 2011.  <http://www.pbs.org/art21/artists/antoni/>.
MoMA. The Collection: Janine Antoni. 6 March 2011. <http://www.moma.org/collection/browse_results.php?criteria=O%3AAD%3AE%3A8292&page_number=1&template_id=1&sort_order=1>.
Myers, Katherine.  Press Release: Antoni works Day and Night in Performance at Mass MoCA.  26 September 2000.  6 March 2011. <http://www.massmoca.org/press_releases/09_2000/9_26_00.html>. 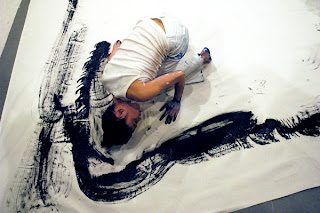 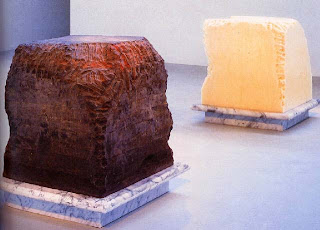 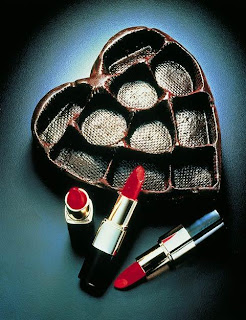 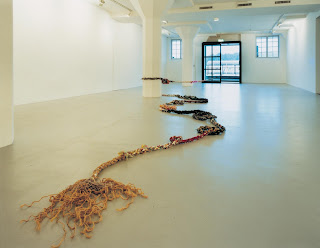 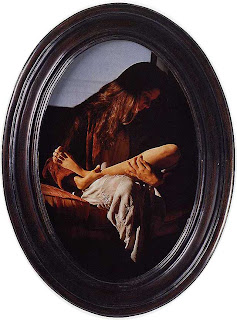